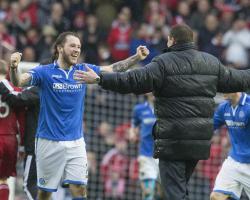 Saints strike psychological blowSt Johnstone struck first blood against Scottish Cup final opponents Dundee United as a one-sided Premiership encounter at McDiarmid Park finished 2-0.Tommy Wright's Saints side moved to within three points of United in the table thanks to goals in either half from Steven Anderson and Stevie May, who notched his 26th goal of the season

United were lacklustre all afternoon as they watched their slender hopes of finishing second all but disappear and will hope they can raise their game for the next meeting between the two sides when there is silverware at stake.This was billed as a dress rehearsal for the showpiece at Celtic Park on May 17 and both sides sent out strong teams.In their last encounter back in March, Saints ran out 1-0 winners thanks to May's strike in a fiercely contested match which saw Saints manager Tommy Wright and his opposite number Jackie McNamara sent to the stand for an angry exchange late on.McNamara was watching from the stand for this game as he began his three-match touchline ban after withdrawing his appeal against it earlier in the week.Saints began brightly and in the sixth minute Anderson had the first real effort on target

He let fly from 25 yards but his effort was well saved by United keeper Radoslaw Cierzniak, who dived full length to parry it wide.At the other end, Gary Mackay-Steven laid the ball back to Nadir Ciftci whose shot was deflected narrowly wide for a corner.A few minutes later, Mackay-Steven's miscued shot was flicked on by Ryan Gauld but home keeper Alan Mannus was equal to the task as he gathered with both hands.Neither side were really looking like hitting top gear but Saints took the lead in the 32nd minute.United full-back Keith Watson fouled David Wotherspoon wide on the left and from the resultant free-kick, Wotherspoon swung over a tempting centre which saw Anderson rise unchallenged at the back post to head firmly into the net.Saints had a chance to increase their lead not long after making the breakthrough.United defensive pair Gavin Gunning and Andrew Robertson had a misunderstanding and May wasted no time in driving into the box

He advanced towards goal and looked a good bet to increase his tally for the campaign, but saw his left-foot shot from 16 yards go over the bar.In the 42nd minute, May came close again as he latched onto a loose ball 22 yards from goal

The striker had only one thing on his mind as he drove the ball low towards goal, only to see his attempt come crashing back off Cierzniak's right-hand post.There was a tame start to the second half although Wotherspoon tried to lift things in the 54th minute with a shot from distance which Cierzniak held comfortably.Shortly after May was not surprisingly involved in the thick of the action again.This time he cut the ball back to Steven MacLean but despite having plenty time, he dragged his effort well wide.As the hour mark approached, Saints threatened again as May laid the ball on a plate to Michael O'Halloran

But just as O'Halloran looked certain to make it 2-0, he somehow failed to connect from point-blank range and the chance went begging.In the 65th minute, Wotherspoon came within inches of scoring only to see his 12-yard effort hit Cierzniak's far post.But Saints got no less than they deserved when they finally went 2-0 ahead in the 76th minute.Wotherspoon released Dave Mackay down the right and his cross into the box was perfect for May, who duly slotted home past Cierzniak from close range to make sure of the points.United attempted to mount a fightback towards the end but it was too little, too late as the hosts merited their victory