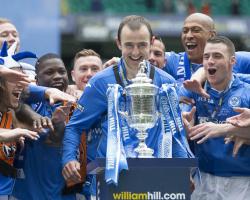 St Johnstone 2-1 Motherwell: Match Report - view commentary, squad, and statistics of the game as it happened.St Johnstone back to winning waysMichael O'Halloran cancelled out his earlier mistake to earn St Johnstone a 2-1 victory over Motherwell with a well-taken double.O'Halloran gifted Motherwell possession before Lionel Ainsworth powered home a 13th-minute equaliser but the Scottish Premiership contest turned with five minutes left of the first half.Ainsworth came close to a second but his shot was saved by Alan Mannus and Saints went straight up the park for O'Halloran to score following a one-two with Lee Croft.An improved Motherwell missed some decent chances but their season of woe continued in the 80th minute when O'Halloran netted a brilliant solo effort, although only after Motherwell defenders Stephen McManus and Fraser Kerr collided in the box.Motherwell remain second bottom in the league and their misery was compounded by the fact former talisman James McFadden had a hand in both goals as they suffered a fifth consecutive league defeat in front of only 2,531 fans at McDiarmid Park.William Hill Scottish Cup winners St Johnstone and Motherwell, runners-up two years running, came into the game as the two lowest scorers in the league with only 13 goals between them in the first 11 matches.There were plenty of chances though and Saints created two before Motherwell took the lead, Dan Twardzik getting down to hold O'Halloran's shot before Frazer Wright glanced a header just wide from McFadden's free-kick.Motherwell benefited from a break to open the scoring with Henrik Ojamaa helping the ball on to Ainsworth after O'Halloran was dispossessed on the edge of his box

The winger got a free shot after a ricochet and blasted the ball into the roof of the net from 10 yards.Motherwell defender Simon Ramsden had a header saved and the visitors were looking comfortable apart from a few deep corners from McFadden.Steven Hammell and Dave Mackay both came close from 30 yards at either end before the key moment of the game.Ainsworth looked like he might double his tally when he turned a man on the edge of the box after Ojamaa had twisted and turned and fought for the ball before laying it back.But the shot was too close to Saints goalkeeper Mannus, who blocked with his feet and inadvertently set up a counter-attack

McFadden fed O'Halloran who rode Ramsden's challenge inside the centre circle and kept charging forward.The former Bolton player played the ball out for Croft who cut it back for his team-mate to slot into the corner from 10 yards.Ojamaa set up two chances for Motherwell to regain the lead before half-time but John Sutton took a poor touch six yards out and Ainsworth steered a shot wide of the far post.Ainsworth set up a couple of chances himself after the break but Kerr wasted a shooting chance by chipping a cross over the bar and Ojamaa shot straight at Mannus from the right channel with the keeper's fumble proving harmless.O'Halloran had a long-range strike held and Saints came closer in the 72nd minute after Croft's cross found Wright.The defender got a good head on it but Twardzik got down well to parry and Gary McDonald sliced the rebound wide under pressure.The hosts were lifted by the chance after a quiet start to the second half and O'Halloran grabbed the winner after McFadden shimmied on the left wing and cut the ball back to the edge of the box.O'Halloran went past both McManus and Kerr as the Motherwell pair collided and then took it round another defender before dinking the ball over Twardzik from the edge of the six-yard box.O'Halloran soon had a shot blocked when McFadden was screaming for a return pass following a counter-attack before the latter went off to a standing ovation from both sets of fans as Saints held out comfortably for their first win in six games